If you want to speak Moroccan, and you already know the Arabic alphabet, then you won’t need to go through this page.

If, however, you are not familiar with the Arabic alphabet, and have no idea how to read and write Moroccan Arabic, then please continue reading.

On this page, we will tell you about the different languages of Morocco, the different ways of writing Arabic, and the approach we adopted on Speak Moroccan to write Darija.

Morocco is known for its linguistic diversity.

In Morocco, we use Modern Standard Arabic in formal contexts, such as journalism, administrative procedures, and education.

And we use Moroccan Arabic in daily conversations, informal exchanges, TV shows, and so on.

Additionally, we also speak Amazigh, French, and Spanish both formally and informally throughout the kingdom.

One of the manifestations of Morocco’s linguistic diversity is the headers of most formal documents.

As a matter of fact, we use three languages in such headers: Modern Standard Arabic, French, and Amazigh (written using the Tifinagh alphabet).

How do we write Moroccan Arabic?

In principle, we should write Moroccan Arabic using Arabic letters.

In formal contexts in Morocco, we seldom use Moroccan Arabic in the written form.

You will, however, see billboards and other marketing materials in Morocco using transcribed Moroccan Arabic, i.e. Darija written with Latin letters, also known as the Arabic Chat Alphabet.

In informal contexts, on the other hand, Moroccans have different preferences, as some use Arabic letters while others use the Arabic Chat Alphabet.

The Arabic Chat Alphabet is a popular way to write Arabic online.

This alphabet is often seen as confusing to non-Arabic speakers, though.

This is due to the peculiar use of numbers in the Arabic Chat Alphabet.

Why do Arabic-speaking people transcribe Arabic using letters and numbers?

There are two reasons behind that.

The first reason is that there was a time when Arabic keyboards were not always available on computers and phones. Hence the need for Latin transcription in the first place.

The second reason is the absence of Latin equivalents for some Arabic letters.

To solve this problem, Arabic speakers had to come up with a solution to transcribe unique Arabic letters.

One creative solution was using numbers that somehow resembled the Arabic letters they were meant to transcribe, like 3 for ع and 7 for ح.

(Read more about the history of the Arab Chat Alphabet here).

Is There a Standard Arabic Chat Alphabet?

Unfortunately, there is no standard Arabic Chat Alphabet.

Since the Arabic Chat Alphabet is an informal means of communication online, regional differences have sprung in this regard.

Luckily, for the majority of the Arabic alphabet, there are Latin equivalents that are used by everybody.

To transcribe the Arabic letters that do not exist in Latin, we have opted for simplicity for our materials here on Speak Moroccan.

Therefore, we will use only the three numbers that have the most consensus online, i.e. 3 and 7 used to transcribe ع and ح, as well as 2 used for glottal stops.

So, to avoid using any more numbers, and consequently avoid any unnecessary confusion, we will use “kh” to refer to the Arabic letter that sounds like the Spanish “J”.

And we will use “gh” to refer to the Arabic letter that sounds like French “r” in “Maroc”.

Additionally, we will use the letter “t” to refer to both a regular “t” as in the word “tea”, and an emphatic “t” as in “tall”.

Please note that we will also be using the Arabic alphabet on Speak Moroccan.

So, if you have the time, energy, and motivation, we definitely recommend that you learn the Arabic alphabet. 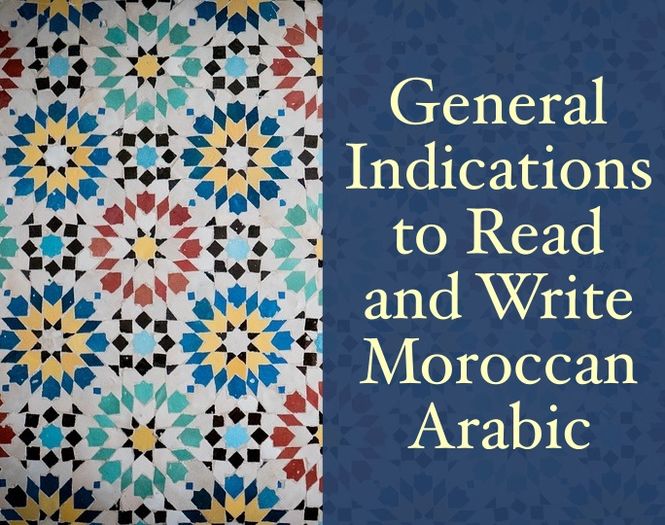 In summary, the table below shows side to side Arabic letters, the corresponding Arabic Chat Alphabet, and Speak Moroccan’s transcription choice.

Also, you will find in the last column notes on how to pronounce each letter.

If you are familiar with the Arabic alphabet, you will notice that some letters are missing from the table (ث، ذ، ظ). This is due to the fact that we do not use those letters in Moroccan Arabic.

Head over to “Moroccan Arabic – Unit 1” to kick start your Darija learning.

Or pick any other Moroccan Arabic material you are interested in for the moment.

We'll lead you through a fun journey from knowing nothing about Moroccan Darija to having conversational fluency.

Summary: On Speak Moroccan, we used a simplified transcription method for Moroccan Arabic. Come learn more about it with our general indications.